Only have Dogecoin or Paypal?  No problem!  Send us Dogecoin or donate with Paypal here instead! 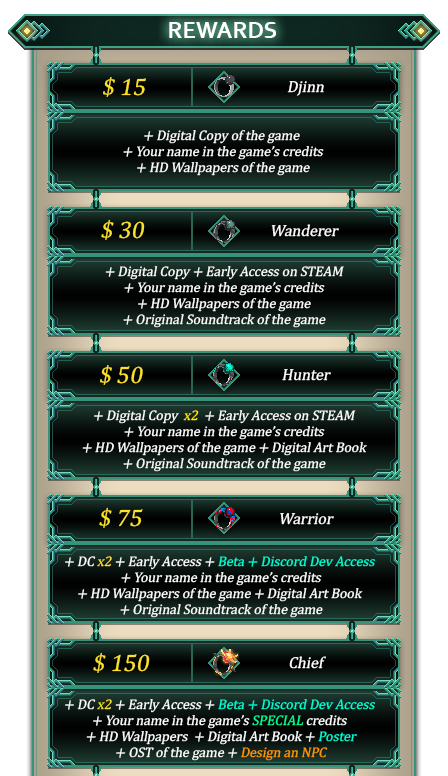 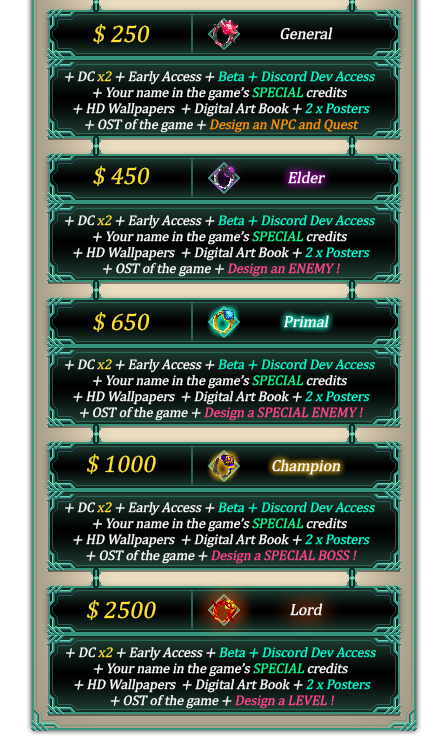 Mira: The Legend of the Djinns Trailer 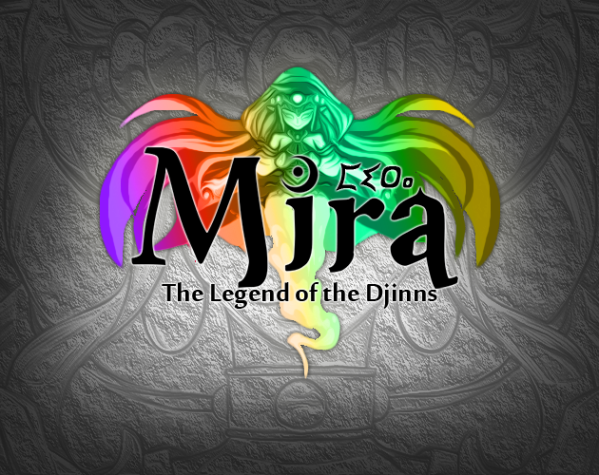 Long ago, there was Amazgesh. A golden Kingdom forged in peace between humans and Djinns after hundreds of years of war.

Then came the Fall, a cataclysm that turned Amazgesh into a wasteland of death and emptiness, with most of the remaining life twisted by corruption and mutation. Humans struggle to survive in a ruined world while almost all of the Djinns have long since disappeared or died.

As for how this all happened, well, who can say? No mortal now remembers the truth.

Yuba, a treasure hunter from Tiziri Village, travels the wastes in search of artifacts and ruins. What he finds keeps his purse full and his curiosity sated. Lately he has been working for a mysterious man known as Shadow.

Deep in the bowels of a long lost ruin, Yuba discovers a treasure more priceless than artifacts or gold: a Djinn called Mira slumbering in darkness for a thousand years, lost in the void of her forgotten memories. Only by forming a sacred Bond with Yuba can she escape her prison and embark on a quest to recover her lost memories and learn the reason she was sealed away.

Together, they set out on a journey that will take them into the very heart of Fallen Amazgesh’s secret history, one in which Mira may have played a critical role… 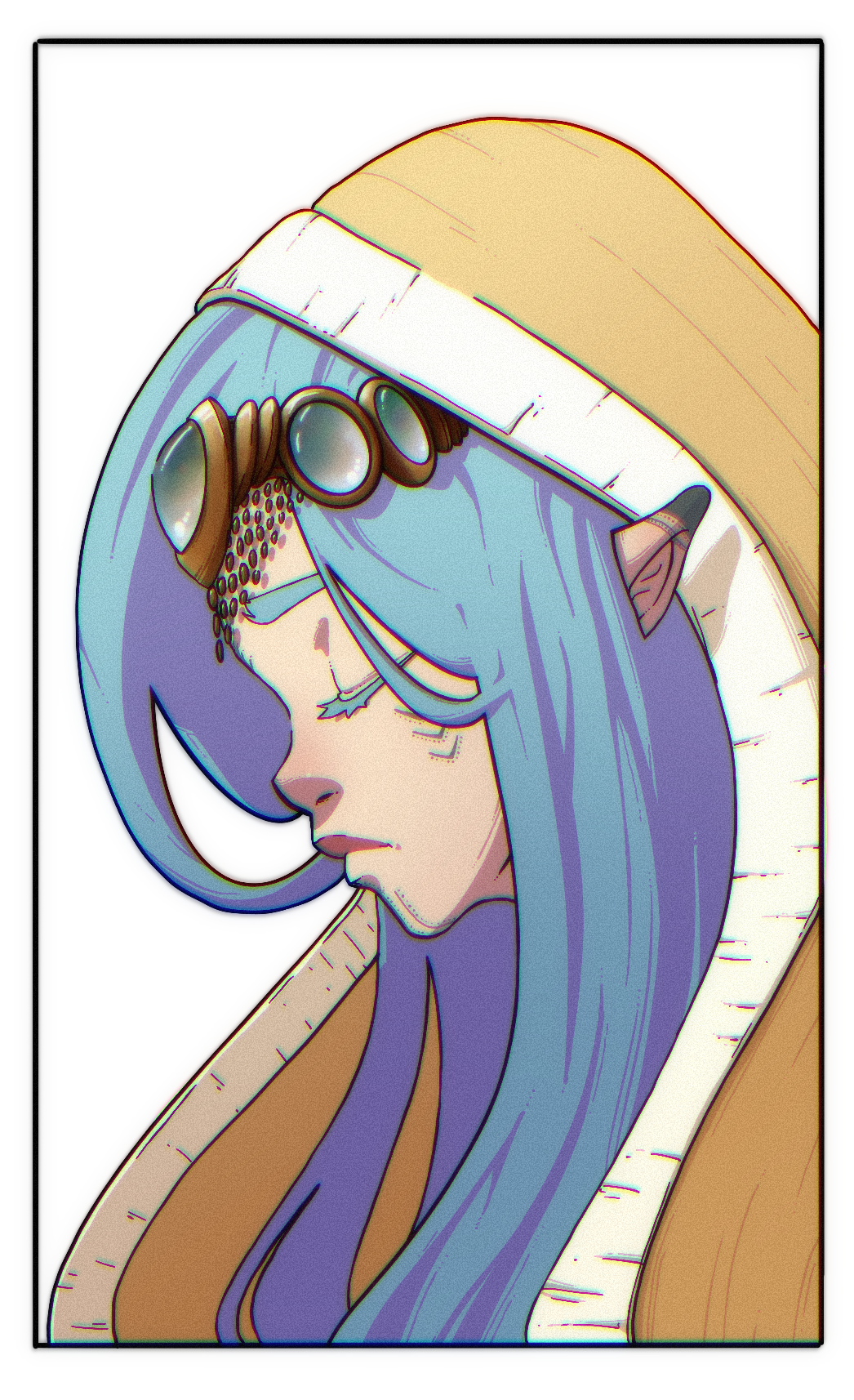 Mira is a mysterious Djinn who was locked inside Tagelda, an ancient ruin of Old Amazgesh. Unlike the sinister legends about Djinns, Mira is curious and friendly but has lost her memories. In theory, her amnesia is a result of her imprisonment but the only clue she has is the glimpses she gets when she comes into contact with ancient relics. Yuba has promised to help her by giving her access to the relics he finds. 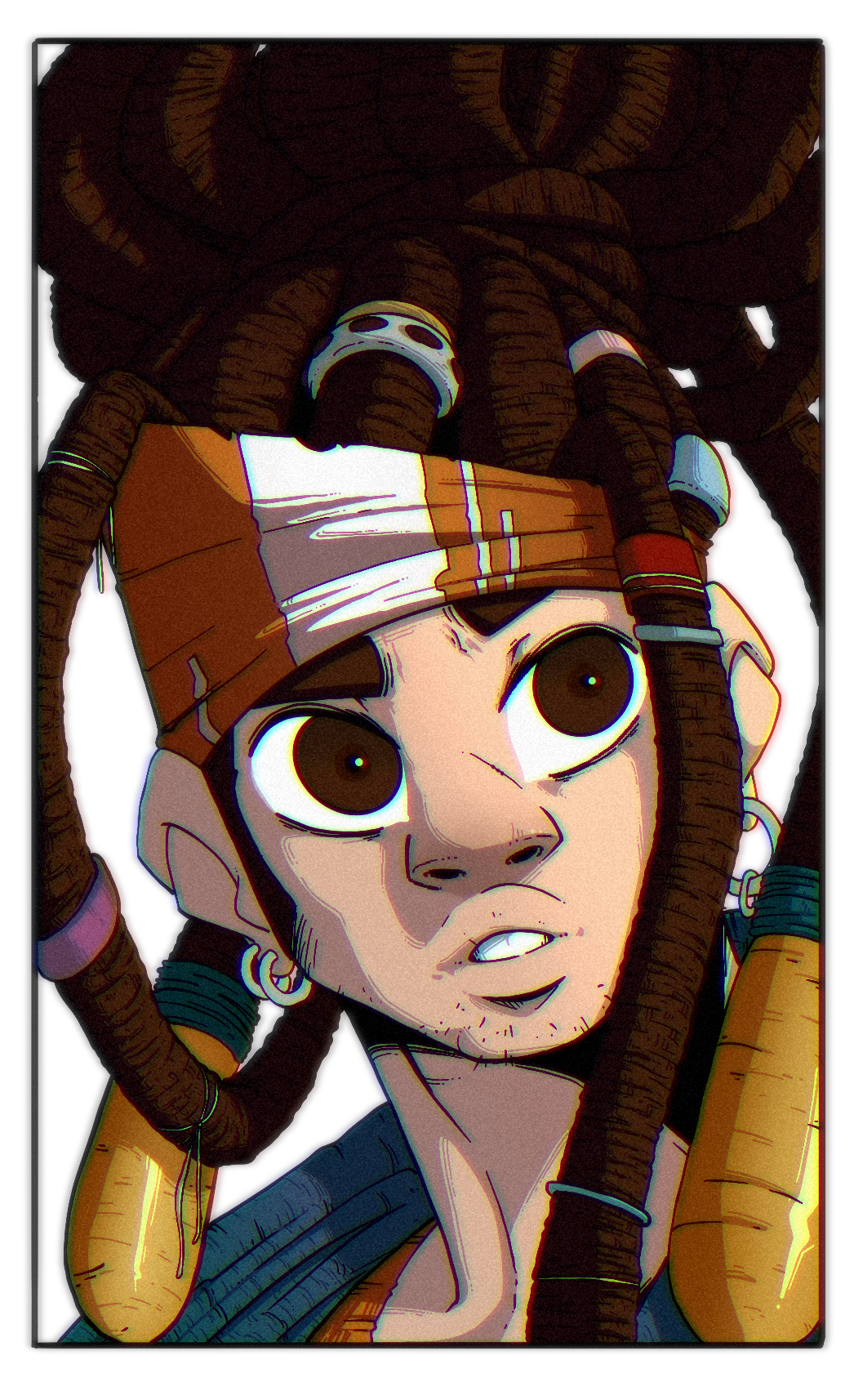 Yuba is the main character and who the player will control. He is a plucky, resourceful treasure hunter who is from a quiet village on the edge of a wasteland. Yuba is always seeking a challenge, the money is just a bonus. His first love is music and when he’s not fighting his way through a forgotten tomb, he’s plucking his way through ghambri scales. 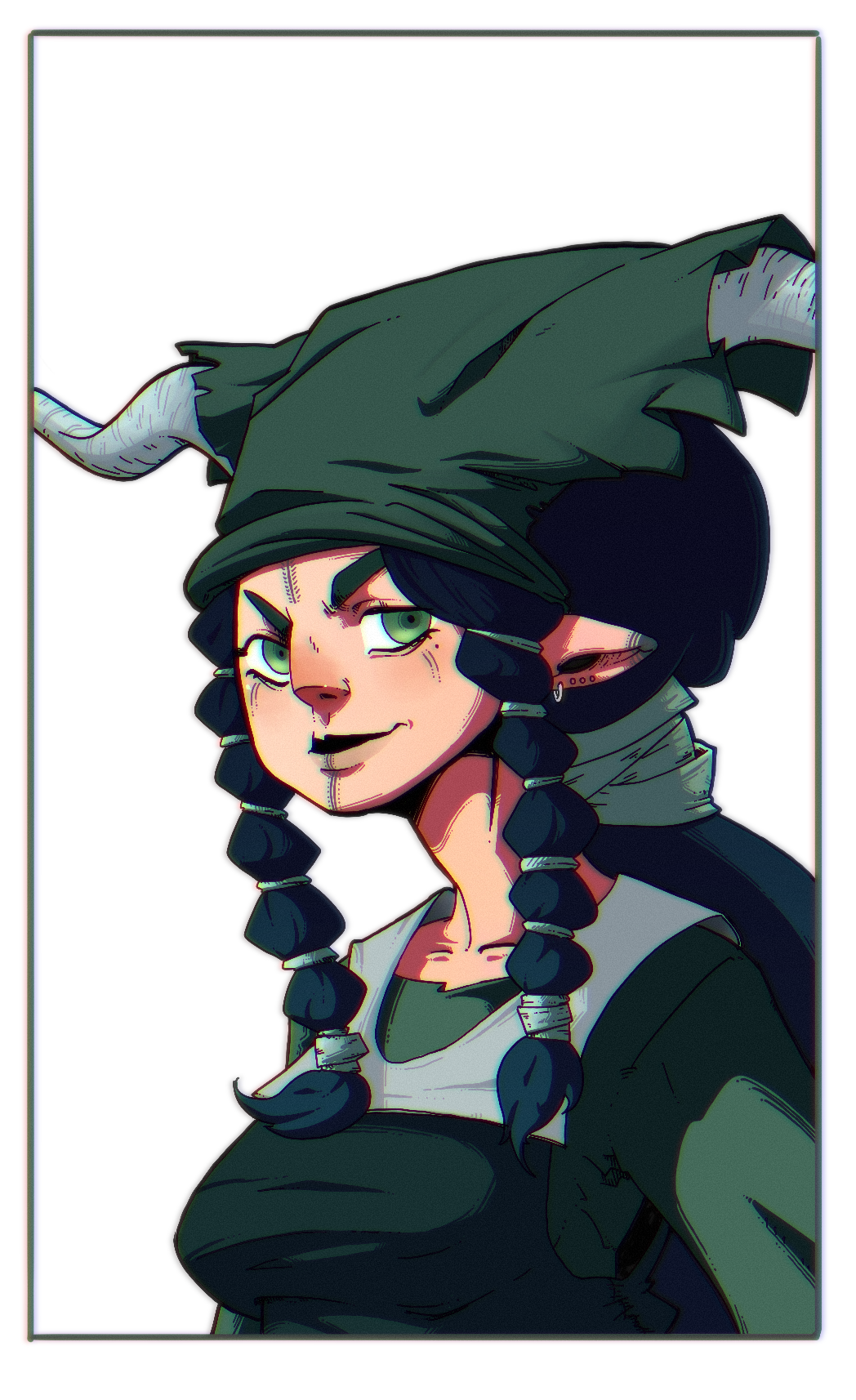 Aisha is a cheerful but scatter-brained Celestial Djinn.  Her people, the Sky Clan, are known for their mastery over the wind. Aisha is upbeat and optimistic, though she has a tendency to go off on tangents and interrupt everyone, most of all herself.  She doesn’t know anything about humans, so naturally she thinks of herself as an expert. 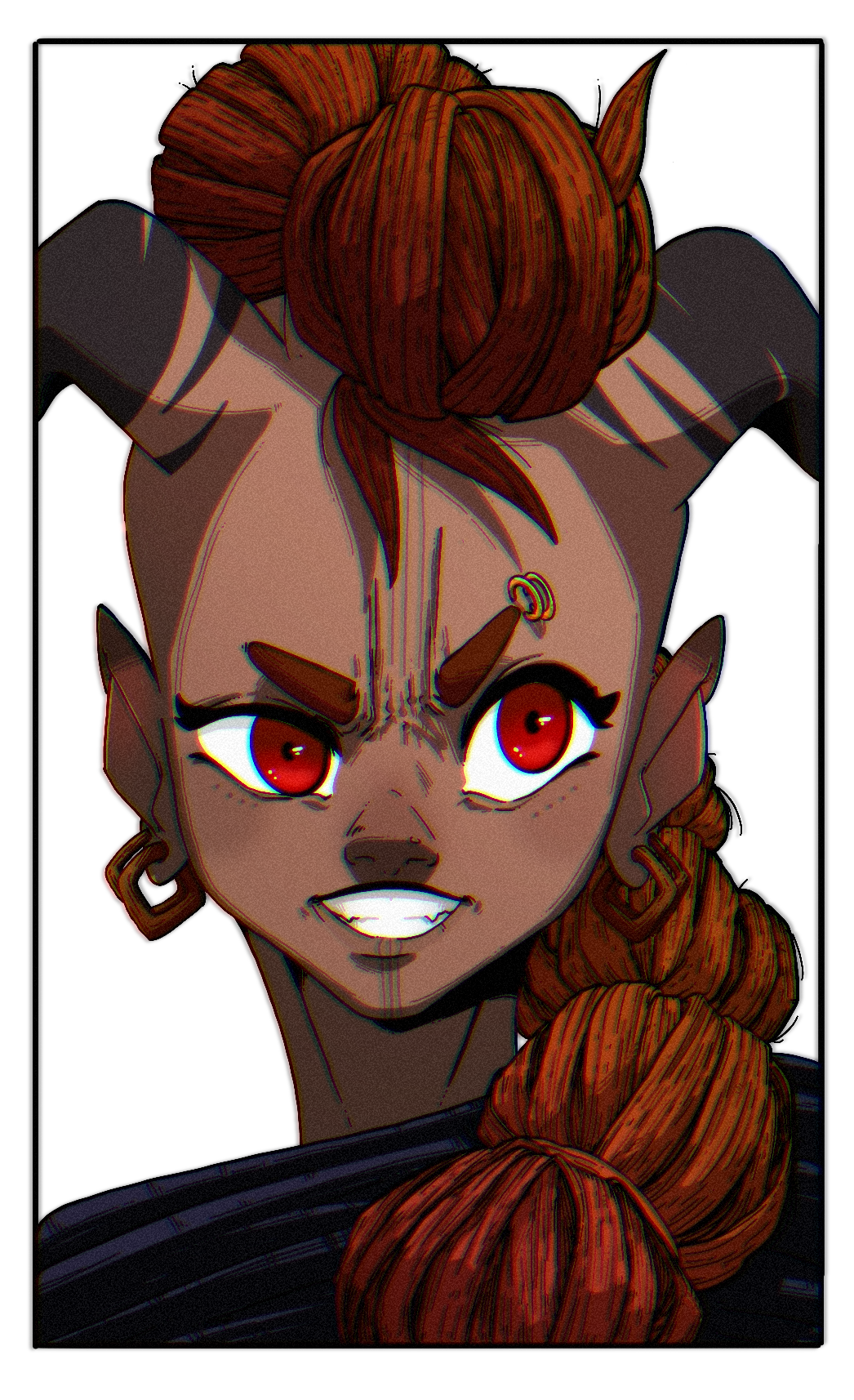 Rkia is a ferocious and volatile infernal Djinn of the Fire Clan.  She has a loose grip on her temper and holds a grudge, but she also has a strong sense of right and wrong.  She just prefers her own definitions.  She has trust issues with other Djinns and, especially, humans.  Rkia is a difficult ally, but someone you want on your side. 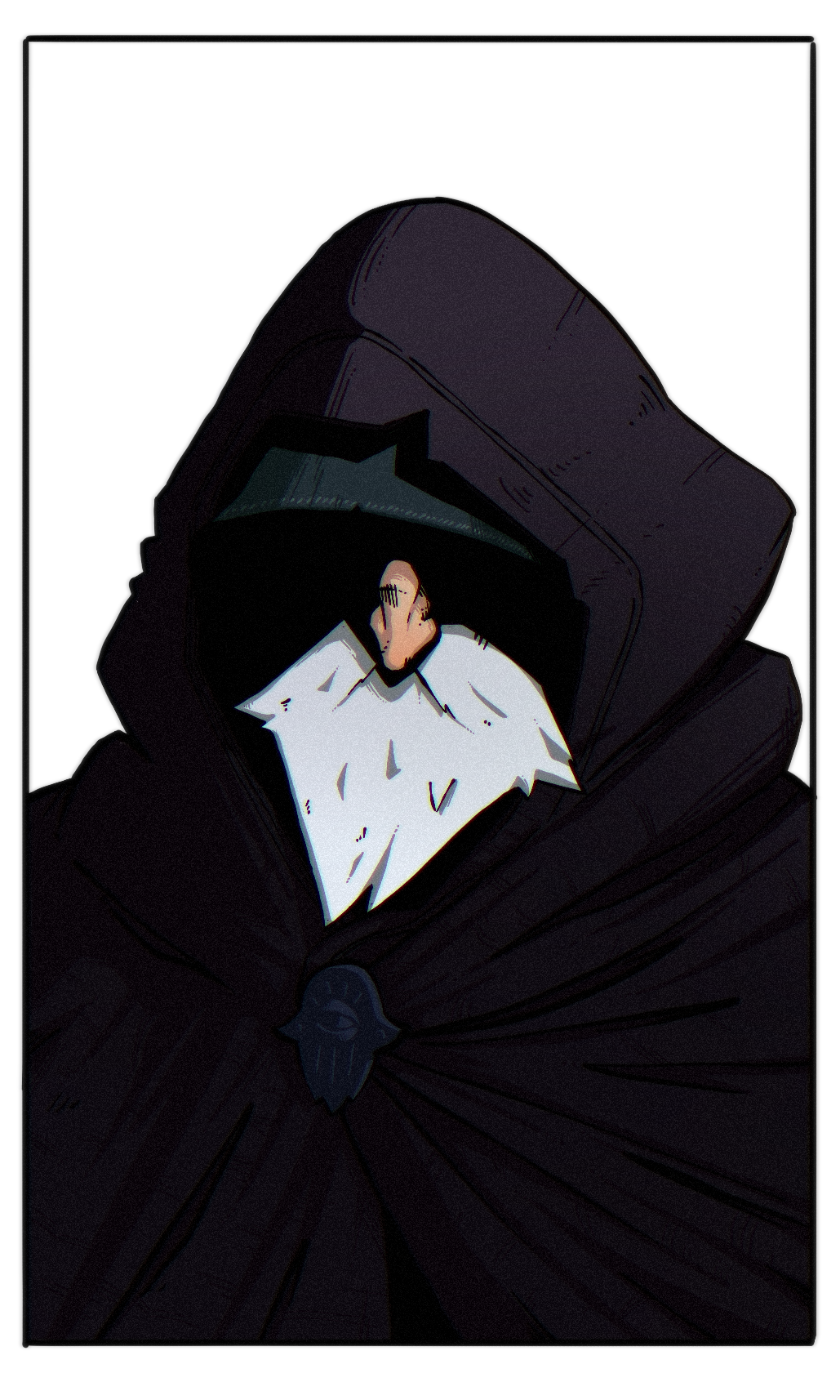 Shadow is an enigma right down to his name.  He says nothing about himself and hides his face within a dark hood. He appeared one day in Tiziri, offering work to any treasure hunter brave enough to venture deep into the ruins of Desert Ocean.  Yuba has worked for him for a while, attempting to track down important relics collected by the Zultan. 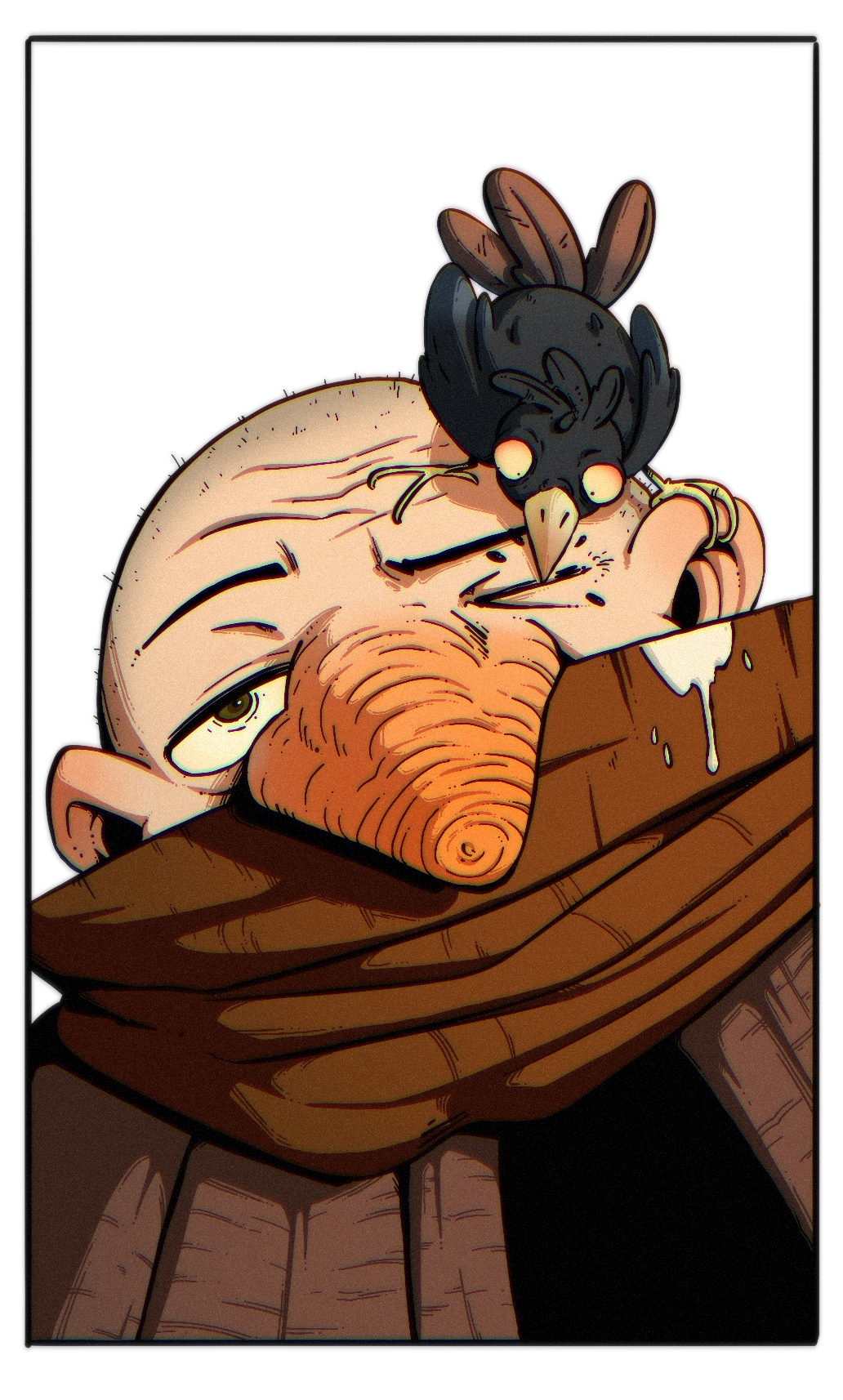 Adjin the Bird-Man is a Tiziri local and an eccentric. Not that he’s the only one.  He spends all his time in a high spot in the village where he can commune with his bird friends.  He hardly talks to anyone except for Yuba and tends to refer to himself in the third person.  The villagers like to give Adjin space until he comes down for a bite to eat.

A boundless kingdom created through the peace between humans and Djinns after centuries of conflict and rivalry.  A thousand years ago, it was destroyed during an apocalyptic disaster called the Fall.

It is now referred to in two different ways, a distinction made to separate the land between the past and present.  Old Amazgesh is an historical term and refers to the golden age when the kingdom was whole.  Fallen Amazgesh is how folk refer to the land in the present.

What was once the heartland of Amazgesh is now a seemingly endless expanse of wind, sand and corrupted creatures.  There are many ruins and oddities in the desert, drawing treasure hunters and those brave enough to risk it.

The Desert Ocean connects most of the major locations in Fallen Amazgesh.

When Amazgesh was destroyed, the kingdom fractured into slivers. Many disappeared into the sands of the Desert Ocean or were lost to war, famine, and other threats. The last remaining is the Zultanate, ruled over by a long line of Zultans who claim they are descended from the princes of Old Amazgesh. In theory, the Zultans rule over all of Fallen Amazgesh. In reality, their power and hold over the surrounding regions has always been weak. They have never been able to reclaim the traditional territories, including what is now ruins or wilderness. Over the years, many Zultans have promised to bring back Old Amazgesh but none have succeeded.

Kenani is the palace of the Zultan, many miles from the edge of the Desert Ocean where the lands are safer. It is an old palace but has been kept in repair by the Zultans. A town has also grown around it, making it the capital of the Zultanate.

A small village on the very edge of the Desert Ocean. In many ways, it’s a typical village of Fallen Amazgesh. In others, it is exceptional. It flourishes where others struggle because of its access to water. The people of Tiziri are simple but proud.

An ancient castle of Old Amazgesh that was said to have domed towers that touched the skies and kissed the clouds. Most of it is buried under the sand of the Desert Ocean, having been sealed during the Fall.

The Necropolis of Tagelda gets its name from the tale of its destruction: hundreds of occupants were buried with it, making it into one massive tomb.

Mamora is an immense woodland. It is a dangerous, wild place that is considered haunted, full of monsters, and generally an unsafe place for people. It was also settled once, they say, and contains many ruins and artifacts for the brave to find.

In the forest’s heart stands Amekran Targant, the last Great Tree. The Great Trees were taller than the tallest towers, reaching up to the skies and mountains.

A volcano located in the mountains near Mamora Forest. Some say that ash from its eruptions fed the soil of Mamora Forest for centuries.

In the skies above the Desert Ocean, there are floating rocks and islands that are said to have broken pieces of the legendary Skylands of Tamazgha. Many believe this is all that remains of Tamazgha.

Some of the floating stones of Wandering Avlad are tiny enough that a person can hardly stand on them, with others large enough to support life.

Legend tells that the Blue Djinns of Tamazgha once lived in the sea. During the Fall, the seas were corrupted and destroyed, forcing them to take to the skies. With the help of the Sky Djinns, their cousins and allies, they were able to lift the ocean floor into the sky to form the Skylands.

The only evidence of this tale is Wandering Avlad. The Skylands themselves are hidden from human eyes. It is said that only a Djinn can find the way.

A massive cavern that is known as the “darkest place in all Amazgesh”. Ifri Hollow is a legend among treasure hunters, similar to Tagelda.

One of the reasons people fear to tread in the Desert Ocean. Averkan is a gargantuan snake that is visible from many parts of the desert. It is often used as a landmark and though dormant for generations, Averkan is known to rouse and move from time to time.

Averkan is a mystery, born during the Fall and considered by some to be god-like if not a living god of some kind. Some say it was created as a weapon, others that it was born of corruption and evil.

A mythical land in the East where it is said that a rich kingdom rests near an ocean of water. Folk from Amazgesh talk about Far Difa when they are wistful. To them, it’s a paradise forever out of reach. Its name means “the warm lands far away”. 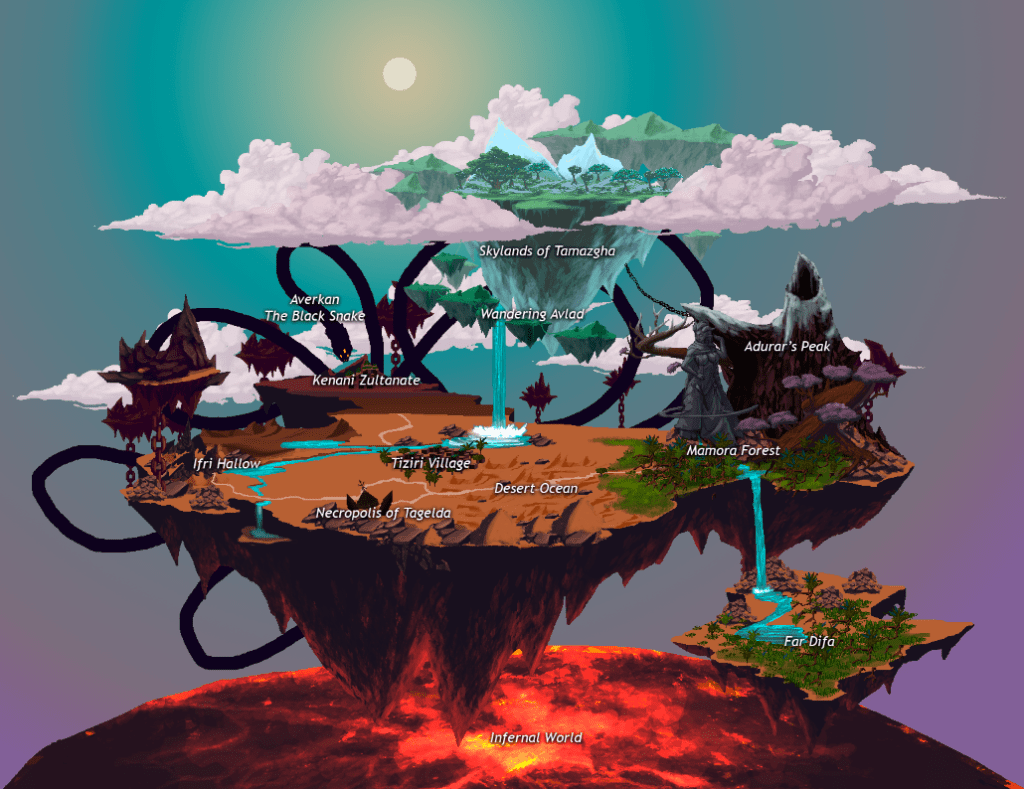 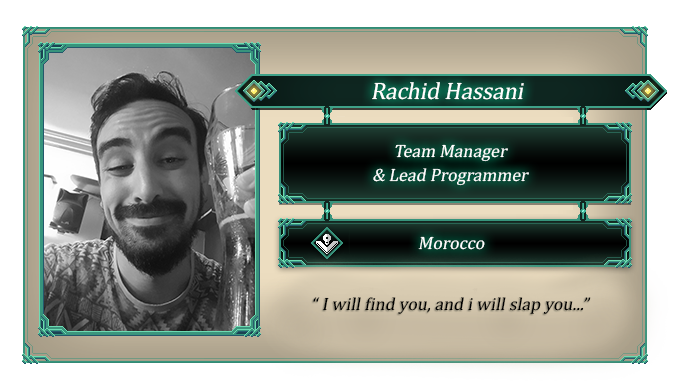 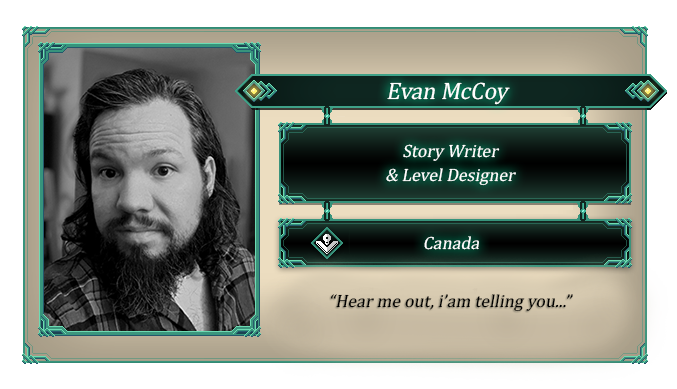 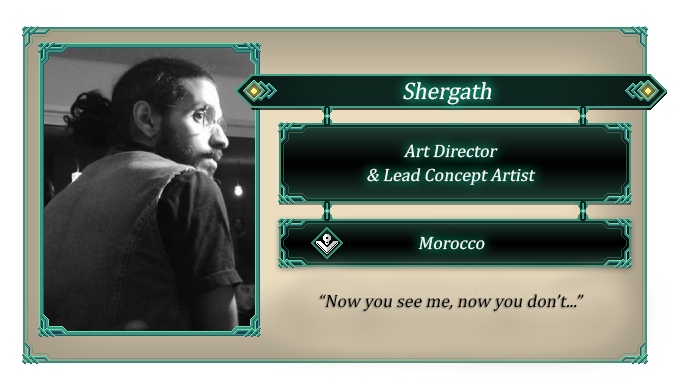 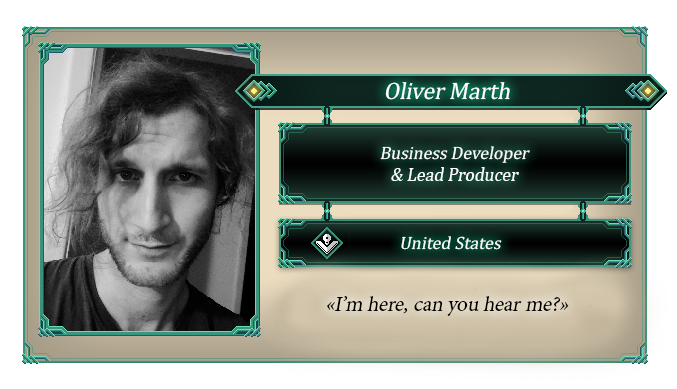 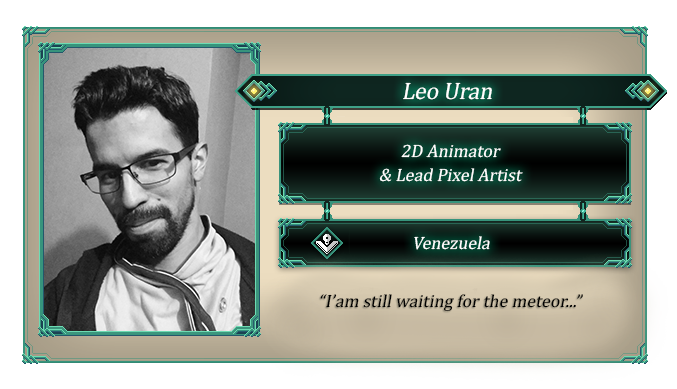 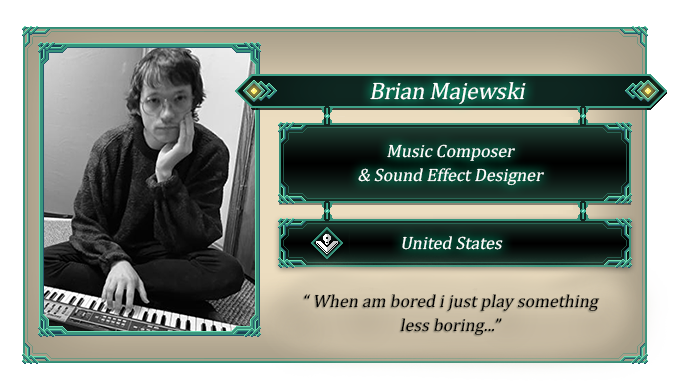